[back to main text: Evolution of mustard ]

A few more things to think about...

through the process of artificial selection,
they are doing science.

Is it because of the soil?”
“Do more seeds sprout
if we plant them deeper underground?”
“How can we get larger mooli?”

and do experiments:
“Let’s have the plants closer
together in one row and farther
apart in the other row, and see
which gives a better crop.”
“I think the reason the cabbage
last year did not form heads
was that the weather was too
hot. Heat makes the plants grow
tall. So this year let’s plant the
cabbage earlier in the season."

They make observations
and analyse results:
“See how shady it is here...

I think the reason the seeds

did not germinate was that
they did not get enough sun on this side.”

They communicate:
“The people in the next village

have some strange looking cabbage.

Maybe we should get some seeds from it.”

However, farmers’ science has not progressed

to good education or communication.

the class division into rich and poor,

and the hierarchal structure of education

have been big obstacles.

But some people do not agree that when
our ancestors did this they were doing
science. They say that science began
more recently in Europe as a result of
the Renaissance (which began only in
the 14th century). They say that science
was what Galileo did when he built a
telescope and studied the moons of
Jupiter. They say that farmers were not
scientists. Farmers were illiterate - they
did not write careful records of what they
did. They may have made guesses, but
they did not make theories or hypotheses.
They did not work systemically. They
did not have an explicit understanding of
artificial selection.

It is true that ancient farmers did not
write records of what they did. But maybe
we are being biased when we say that
science cannot be done without writing.
Or maybe we are not recognising the
accomplishments of farmers because they
were not ‘upper caste’ or ‘upper class’ -
they were just labourers.

Certainly early farmers must have
asked questions like those shown above.

And they must have learned

through a process of trial and error.

Aren’t experiments also a process
of trial and error? In the process of trial
and error our ancestors must have also
guessed or tried to predict what the
results would be. Did they base their
predictions on theories which they made
through observation, reason and logic?
Or did they invent wild stories and myths
about spirits and magic, and base their
predictions on these myths?

Did they believe what authorities said

or did they question authorities

in order to revise theories

and come to new conclusions?
Would it have been possible to develop
cabbage and cauliflower if they based
their predictions on myths and magic?

(1) There is variation between the individual organisms
that make up any population.

(differences in the DNA) of individual organisms.

These mutations can be passed to offspring.

(3) Throughout the individuals’ lives, their genomes
interact with their environments to cause variations
in traits. (The environment of a genome includes
the molecular biology in the cell, other cells,

as well as the abiotic environment.)

(4) Individuals with certain variants of the traits

may survive and reproduce

more than individuals with other variants.

How do we know that

(1) We do not find any population without variation.

(2) We know that heritable mutations occur

because we find them by DNA sequencing

of individuals and their offspring.

(3) We find correlations between mutations

and traits. We also observe that mutations

cause changes in proteins.

However, due to the complex interdependencies

between the genome and its environment,

we usually cannot say whether a
particular mutation causes a particular trait.

(4) We observe that individuals with certain traits
survive and reproduce in certain populations.

For example, we observe how

and other variants decrease

in a population of bacteria.

(5) We observe evolution - we see that

populations do change over generations.

If the changes are large enough,

we call the population a new species.

Other methods people use

to produce new kinds of plants

Hybrid plants
By pollinating one kind of plant with the pollen
from another variety or related kind of plant,
we can breed plants with new characteristics.
Scientists have produced many kinds of hybrid rice,
hybrid wheat, and hybrid vegetables.

Hybrids may have disadvantages

as well as advantages.

For example, the yield may be greater,

but new seeds have to be purchased each year.

Once, some scientists thought
it would be nice to have a plant

which has the roots of mooli

and the shoots of cabbage.
They pollinated mooli
flowers with cabbage pollen.
But what did they get?
Unfortunately, they got the
roots of cabbage with the
shoots of mooli! 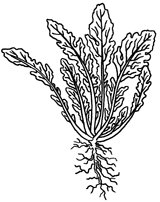 How will it change its environment?
Will the new plant be more expensive
for farmers to grow?

Maybe we could get
mangomustard by GM...
but maybe the mangomustard
would be poisonous!

WHO DECIDES?
No one decides what will happen in natural selection.
But in artificial selection who decides?
Did the people who planted the seeds

Nowadays does the government decide?

Do the seed companies decide?

or on the basis of desire?
Are the wrong decisions sometimes made?
Who should make decisions, and on what basis?

If the master decides which seeds

the slave will plant,

will the master make the right decision?
Some masters may be better than other masters.
But there is no such thing as a good master.

Loss of variety is a serious problem
Nowadays seed companies try to get all
farmers to buy a particular kind of seed they
have developed. As a result, the number of
varieties of many crops are decreasing.
For example, people in the same village,

or in different villages, used to grow

many different varieties of rice.

But everything is interconnected and
everything keeps changing. So a variety that
was good a few years ago may not be so good
now - it may have become less resistant to
some new fungus or beetle. We may need to
develop new varieties of rice. But how can we
do this if we do not have a variety of plants to
choose from?

Therefore it is important to encourage a
diversity of varieties, and to prevent the
extinction of varieties which may one day be useful.

Evolution depends on having populations
in which there are a variety of individuals. 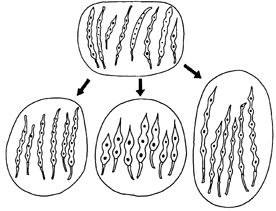 The population does not evolve

Did you believe everything you read

... I hope not.
If you were thinking like a scientist,

you should have been questioning what you read!

For example, how do we know where crops

like cabbage and cauliflower came from?
This question is currently being

Scientists do not find cabbage and
cauliflower growing in the wild.

But they do find various types

This is in line with the possibility

that cabbage and cauliflower were produced
by artificial selection, not natural selection.

You can find evidence that various plants in

the mustard family are related

by comparing the forms of their flowers,

leaves, roots, and other parts.

You can also compare their tastes.

in plants in the mustard family,

which give them a characteristic taste.
By determining the DNA sequences of

the wild and cultivated varieties,

scientists find that they are related.

about how different the plants are

and how long ago they diverged, forming
new populations with different characteristics.

Scientists have looked for historical,

to find out when and where
crops like cabbage first appeared.

For example, more than 2000 years ago

in the ruins of ancient cities,

and have determined the ages of the seeds.

Although traces of some wild mustards

have been found in very ancient fossils,

no traces of cabbage, cauliflower, or

mooli have been found which are so ancient.

of cabbage from populations of wild mustard,

then people produced populations of cauliflower

from populations of cabbage,
both through the process of artificial selection.

Why is this research important?

Will it help us understand mustard

and evaluate methods of selection,
so that we can continue to produce new kinds of crops?

And how can we possibly know whether

mustard with long roots was produced

by natural selection due to floods?
Actually, that was just a hypothesis.

We need to collect more evidence

to know how good a hypothesis it is.

We have written this

just to give you a few ideas.
Now it is up to you

and find out more...

...And did those beetles really write that plan?